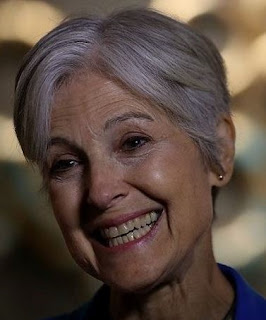 You'd probably look like this too, if someone just gifted you with $2 million of other people's money! Jill Stein is not going away quietly.

Green Party presidential-candidate Jill Stein’s efforts to force a recount in Wisconsin, Michigan, and Pennsylvania were called a "scam" by President-elect Donald Trump and a “ridiculous fundraising and publicity stunt” by House Speaker Paul Ryan.

According to The Washington Free Beacon, Stein will receive $2 million in refunds after initial estimates overestimated the final costs of the failed presidential recount. Stein said on Tuesday that any remaining money from her efforts would be channeled to a group called Count My Vote, which would review the Wisconsin recount before it released a report. A rally was held on the steps of the Wisconsin Capital building. (See details below.)

According to Wisconsin Public Radio, Stein said, “When we asked for a full recount we only got a hand recount in about half of the precincts for about half of the voters. So essentially what we got was half a recount. We also want to include in this, assurance that we have a right to vote and that we put an end to voter ID laws to this interstate cross check that has taken millions of voters off voter rolls."

Stein raised $7.3 million for her presidential campaign, spending roughly $600,000 for consultants and staff working on the recount. The recount in Wisconsin found 131 more votes for Donald Trump, while the recount efforts in Pennsylvania and Michigan were blocked by federal courts.

Wisconsin had estimated that the recount would cost $3.5 million, but the final cost for 70 of the 72 counties in the state was $1.8 million. Finishing the recount could raise the total to $2 million, so Stein would be reimbursed $1.5 million.

A spokesperson for Michigan’s Department of State confirmed that Stein paid in full for 3,050 of the state’s 7,786 precincts before the courts halted the recount; but Stein will receive a refund for the remaining 4,736 precincts totaling $592,000. 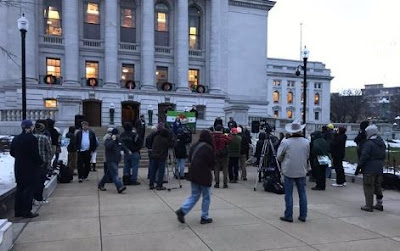 January 3, 2017.
There were more Journalists than voters who showed up for Dr. Jill Stein’s “big” Count My Vote rally on the steps of the Wisconsin Capital Building. The crowd count estimate was 19 or less. The time and effort spent on the rally will be funded by the original suckers, I mean donors.