Thanks for the memories.   Bye. Bye.

Michelle Obama was on Jimmy Kimmel Wednesday night for her last talk show appearance as First Lady. Jimmy is crazy for Michelle, so he went all out. She had the entire hour.

Before the main part of the show started, random audience members had been asked if they wanted to record a thank you tribute to Michelle while looking at her portrait. They communicated amazing, heart-felt stories of inspiration that they attributed to her caring and sincere dedication to her “duties” as First Lady. Then while they were in the middle of talking to the portrait, Michelle would emerge from behind a curtain and surprise them and they recorded their reactions. It was very entertaining. 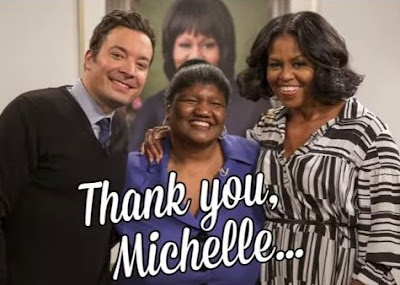 She is beloved to a lot of people. Although she has been committed to her husband’s political career, she seems to have a bigger more existential purpose.

Then for the main part of the show, she changed into a more formal dress designed by Hubert Givenchy and she looked great. 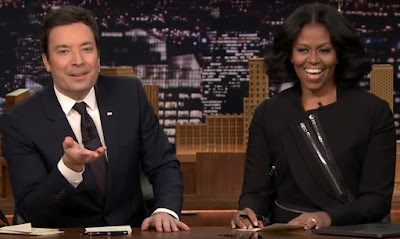 She sat behind the desk with Jimmy and wrote “thank you” notes. She looked particularly lovely. Her hair and dress were perfect. She is very photogenic and looks like she belongs in front of the camera. Maybe, when she eventually gets tired of being the “Former First Lady,” she will do something more interesting.

During the “game” portion of the show, two mystery guests showed up to play a game with Michelle and Jimmy. Amazingly, the guests were Dave Chappelle and Jerry Seinfeld!! 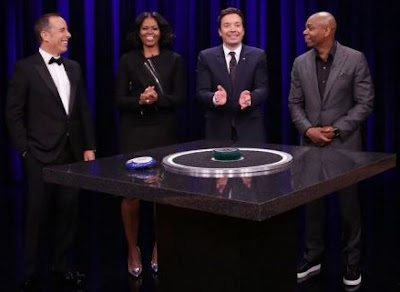 Steve Wonder performed two of his songs that he had rewritten for Michelle: Isn’t She Lovely and My Michelle Amore. 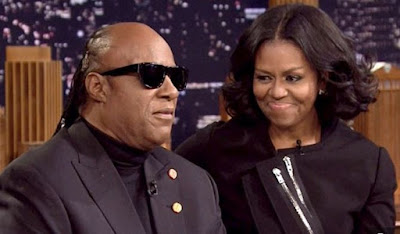 A good time was had by all.

Michelle is great at public relations, but falls short on actually accomplishing anything except having a good time. She and Barack did a bang up job of bringing some amazing contemporary culture to the White House. Their parties and special events were renown.

On the down side: They really socked it to the American people, entertaining themselves like royalty and spending money that could have been better spent. Over the eight years of their reign, their Hawaiian Christmas vacations, Martha’s Vineyard summer vacations, and other personal trips/vacations, have cost hard-working Americans over $96 million.

Barack was a terrible president, but there is only so much you can do if you don’t have what it takes. He gave it a try in the beginning, but eventually got bored with it, ran out of ideas, and just gave up. He relied too much on his "advisers" who were not necessarily the best choices. He just wanted to get as many of his friends as possible onto the gravy train for as long as it lasted.

Sorry folks, but I had to bring us back to reality. I wish them both well; but I am hoping they will step aside and allow the country to get back on track.

Now, we need to give Trump a chance. He works hard and takes care of those he loves; and he actually loves the people of this country. When he says he wants to make this country great again, he means the great life that we enjoyed in the 1950s and 1960s. I was there and he was there and people were actually happy. The war was over and there were plenty of jobs. People bought cars and their first home. He wants to give this generation the chance to experience that kind of greatest.

He has picked the best and the brightest advisers to guide him to make the best decisions. He just needs some cooperation.