Excerpt from the Orange County Register

On Thursday, October 13, 2016, approximately 500 astrologers from as far away as India, Turkey, Serbia, Croatia and Argentina gathered at the Hilton Orange County/Costa Mesa for a four-day conference where they made predictions on global financial markets, relationships and spiritual and karmic life phases. 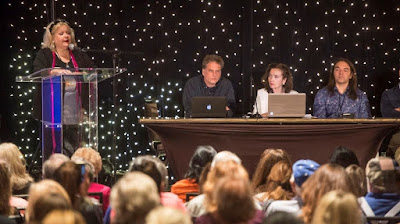 A panel of six international astrologers from Turkey, Canada, Slovenia, England, Serbia and an American from La Jolla, convened to discuss and present their predictions for the 2016 presidential election.

With just one week to go, in one of the most contentious presidential elections on record, the celestial bodies have already declared a winner. The Planets are aligned for a Clinton victory. The panel unanimously tapped the Democratic nominee, Hillary Clinton, for a return to the White House. The panel studied birth charts, election charts and planetary alignments to determine the winner.

Nick Dagan Best, a panelist from Montreal, found that Mars, Pluto and Saturn were aligned at the same point on the ecliptic, or Zodiac ring, signaling a win for Clinton. The next one is expected around 2020, he said, adding that past triple planetary alignments last century came in the midst of life-changing events.

“In 1982, the only time in her life that those planets made a conjunction was when she adopted the name Clinton,” he said. “She’s got that triple conjunction and it would just stand to reason that she would be the one in office when this occurs next.”

The only American on the dais, Edith Hathaway of La Jolla, said the alignment of Jupiter and Saturn within months of a presidential election or inauguration bodes well for whichever political party is in power at the time. Trump’s chart shows him nearing the end of the Rahu, an 18-year period of success and great heights, she said. “Typically when that ends, there’s separation and loss,” Hathaway said.

Though the six featured astrologers used different methods to come to the same conclusion, all agreed that Clinton’s time of birth, which remains in dispute, makes it harder to create her birth chart. On several occasions, Clinton has said she was born at 8 a.m. and 8 p.m. on Oct. 26, 1947 in Chicago. She has also said she was born at 2:18 p.m.

“The problem is we have to dance around it,” said Shelley Ackerman an astrologer and spokeswoman for the event’s organizers, the International Society of Astrological Research. The issue is of such importance that Ackerman, who once obtained Bill Clinton’s birth time from his mother, created a petition that would mandate congressional candidates to release long-form birth records.

Christeen Skinner, a panelist from London, said Clinton will win the election, but may not make it to her inauguration due to her highly publicized health concerns. “I just don’t see that inauguration taking place,” she said. “There’s a big dispute about her time of birth, so it could be maybe she gets the flu. Who knows.” Skinner said Trump’s chart is steadily losing power, possibly from the “battles” he faces over allegations of sexual harassment, lawsuits and a troubled campaign.

Astrology faces criticism from skeptics, who rely more on polling data than on the cosmos. “It’s not about the stars,” said Ema Kurent, who served on the panel. “It’s about us being synchronized with planetary rhythms.”

The Prince Family Trust will be releasing two new albums of re-mastered hits and unreleased new material from "The Vault." Both are scheduled to drop in November. Check back for the details. 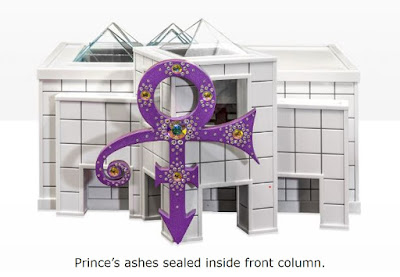 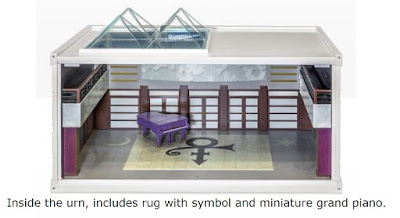 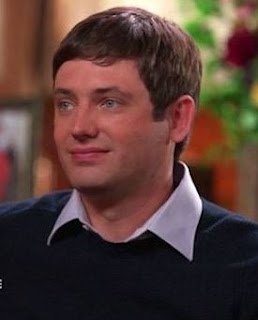 The complaint alleges that in a September 19 interview, Dr. Werner Spitz said that nine-year-old Burke bludgeoned six-year-old JonBenét to death. The complaint filed in Wayne County Circuit Court in Detroit says "Spitz made this accusation without ever examining JonBenét's body, without viewing the crime scene, and without consulting with the pathologist who performed the autopsy on her.” The lawsuit accuses Spitz of being a publicity seeker "with a history of interjecting himself in high profile cases."

In 2008, Burke Ramsey and his parents, John and Patsy Ramsey were cleared of suspicion by prosecutors who said that the DNA on JonBenét's underwear did not match anyone in the family.

Burke Ramsey, now 29 and living in the Charlevoix area of northern Michigan, is seeking a jury trial and at least $150 million in damages. His attorneys said they demanded a retraction from Dr. Spitz on the day after the interview, but Spitz refused. 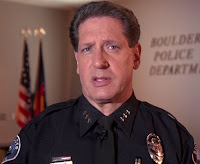 Greg Testa, the Chief of Police for the Boulder Police Department said investigators have collected 1,500 pieces of evidence, including the analysis of 200 DNA samples, traveled to 18 states to interview about 1,000 people and have received, reviewed or investigated more than 20,000 tips, letters or emails. He described the Ramsey investigation as an open case with investigators from the department’s major crimes unit still assigned in an ongoing effort to bring “justice for JonBenét.”

Testa further said, "There is no question this case has caught worldwide attention and there continues to be speculation as to who committed this crime. Publications and movies offer many theories as to how this crime occurred and who is responsible. Facts have been surmised and often distorted, which has led to many conclusions." 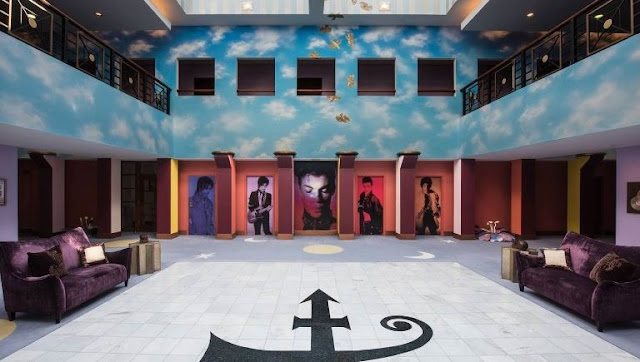 A miniature mausoleum, created on a 3-D printer in the likeness of Paisley Park is encased in glass and on display in the lobby of the Paisley Park Museum. An official photo of the display has not yet been released, but is described as being in the center of the room. It is now the final resting place for Prince’s ashes.

What a stroke of marketing genius!

Fans will be flocking by the tens of thousands to see that. The Chanhassen City Council is concerned that the museum will turn the small town into a "tourist" attraction and negatively affect the residents. Thus, until more research can be done, the rezoning discussions have been tabled until December. Until the rezoning is approved, no tour schedule can be released. Hopefully, both sides will get what they want. 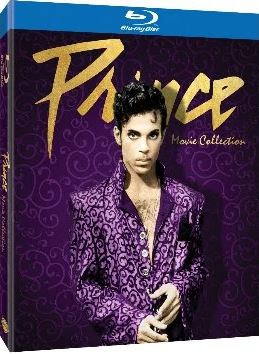 To the delight of his fans, Warner Bros. will be releasing the commemorative boxed set of The Purple One's movie collection this week.

The Blu-ray disc set will include the three feature films that starred Prince — 1984’s Purple Rain, with newly remastered audio and video; 1986’s Under a Cherry Moon; and Purple Rain's unofficial 1990 sequel, Graffiti Bridge. Purple Rain featured Prince in his first starring role in a movie, as “The Kid.” The movie includes his hits “Let’s Go Crazy,” “When Doves Cry,” “I Would Die 4 U” and, the title track, Purple Rain.

The Prince Movie Collection will be available in stores and from online retailers for $24.98. Individual films will sell for $14.97 ea. Amazon.com is currently taking pre-release orders of the boxed set for $19.99.

Just as I predicted, it was announced just two days ago, that the Paisley Park Museum, scheduled to open to the public for tours will NOT open on October 6 as planned. 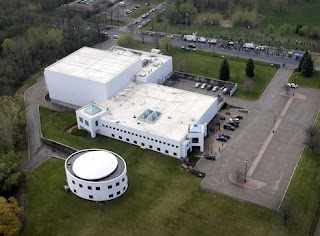 According to the Star Tribune, the Chanhassen City Council, has delayed the opening date. After several hours of discussion and a 3 to 2 vote, they chose to table the zoning request that would reclassify Paisley Park as a museum. The council members want more time to figure out how the museum’s opening would affect Chanhassen’s traffic, parking, and public safety. One member said they also need to decide whether they want to become a “tourist town,” hosting approximately 600,000 visitors annually. Even with a Trust adviser handling the business affairs for the estate, it seems that no one has ever heard the expression, “counting your chickens before they hatch.” Didn’t anyone think that until the details were finalized, it would not be a good idea to make big plans. Geez Louise…

The planned Paisley Park museum will provide fans access to the building’s first floor, which includes over 12 rooms that are organized chronologically throughout Prince’s career, and will include his various instruments, outfits, and other items. Prince apparently left “detailed guidelines” for converting the studios into a museum. Those include “a wall-mounted timeline of his life through the mid-1990s and messages and texts sent to friends that specify how he wanted fans to walk through Paisley Park.

“Entertainment Tonight” shared a sneak peek preview of the museum and a short interview with his sister, Tyka. She was asked about her reaction to her brother’s death and she said she was expecting it. He had told her two years ago that he felt he had done everything that he came here to do.

I am continually amazed by how beloved Prince Rogers Nelson was to people who barely knew him, or didn’t know him at all. Cities all over the world are dedicating various events as a tribute to his memory.


I lived in Cincinnati and I know how conservative that city can be. Yet, they dedicated their annual Labor Day fireworks show to Prince by “purple-izing” the show. Their famous fireworks waterfall that cascades off of one of the bridges across the Ohio River, was turned purple instead of the usual white. 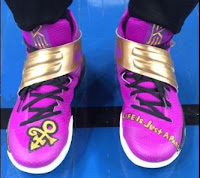 The latest display of affection comes from the Minneapolis Lynx players, who wore commemorative basketball shoes.

On September 19, 2016, the Minnesota Vikings played their first regular season game at their new home, U.S. Bank Stadium. During halftime, they paid tribute to Prince with a rendition of “Purple Rain,” performed by the Minnesota Orchestra and the Steele Family. The entire field was lit in purple.


Click the image to see footage of the halftime show. 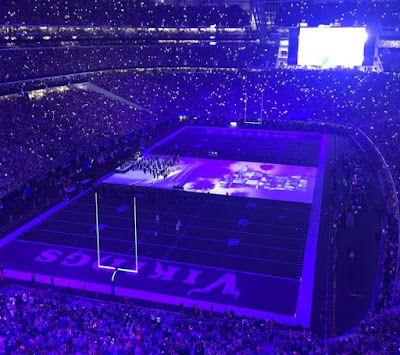