I’m a bit of a whiner. I’m always complaining about how things could have, should have, would have been different if only…

I can’t complain to my sister because she always says the same thing, “Forget about it. You can’t change any of it now, and things could have been a lot worse!” 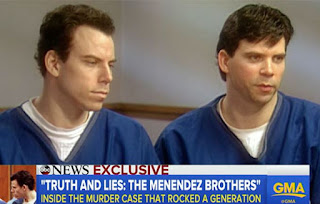 I watched the WABC special about the Menendez brothers who killed their parents. At first they denied it and then finally said that they were sexually abused by their father and their mother was complicit, so they had to kill her too. What a waste! Now they will be in prison for the rest of their lives with no chance of parole and they are in different prisons, so they haven’t seen each other in 20 years. But what is particularly frustrating is when you know there is a way out and you could change your situation, if only…

The reason that I bring this up is because I live in an apartment in New York City. Except for specific laws that have been passed to protect Tenants’ Rights, we have very little control over our day-to-day lives. In order to be comfortable in NYC, you have to have a lot of money. If you are lucky enough to get into a rent-stabilized apartment like I have, you get low rent, but you only get the basic of basic services and sometimes not even that.

Last night, it was 22 degrees outside. Granted that is not Minnesota temperatures, but it is too cold to be without any heat or hot water. I kept thinking the boiler would kick in any minute, but that didn’t happen.

Normally I would convince myself that it was going to be fine and they would fix it in the morning, but just two days ago, my other sister, who also lives in the building, got into a confrontation with the building manager because they want to do some kind of work on our bathrooms to install a circulation pipe for the hot water in order to placate one of the newer tenants who has been complaining that the water is not hot enough and so she is withholding her rent. First of all, the law says the water temp is supposed to be 120 degrees and ours is 118. At that temperature it could nearly scald the skin off your hands. Secondly, I found out that her rent is more than twice what I am paying, so that is her real complaint and the landlord is willing to do whatever they have to do in order to get that rent. If they would just lower her rent a bit, I’m sure they could work things out.

Anyway, from time-to-time we see a story on our local news where an unscrupulous building owner requests access to a rent-stabilized apartment under the guise of doing repairs or upgrades. Then they tear apart the tenant’s bathroom, but never come back and finish the work. They even remove the toilet and sink and make the bathroom completely unusable. Eventually, the tenant will move out. They put the bathroom back together and then double or triple the rent.

So, that scenario was at the top of my mind. I don’t know if they are those kind of people, but it’s getting to where you can’t trust anyone anymore. It’s ALL about the money.

By 12:30 in the morning, the water was still ice cold, so I called the City and filed a formal complaint. Then I called the building Superintendent and told him the problem and added that if he actually lived in the building, this should be something he would know. We have laws covering resident Supers also. I added that I had already called the City and filed a Complaint. Needless to say, I was very depressed. If I had the money, I would just pack up and leave. I am retired now, and don’t really have any reason to be here anymore, but except for the cost of living, it is a fabulous city and I would miss it terribly. What makes it even harder to move is the cost of moving. Renting a DIY van is way, way more expensive here than other cities. It hardly cost me anything to rent a truck to come here. And, if you hire movers, you can’t hire just anyone. There are too many cases of movers giving an estimate of say, $1,500 and then they take your stuff to their warehouse until you are ready for it to be delivered to your new location. Then if you ever want to see your stuff again—the ransom, I mean the moving cost just went up to $9,000. Be prepared for just about everyone to try to take advantage of you.

So, the conclusion of all this whining is that at 4:00am, the hot water came back on—scalding hot as usual. And the heat came on at 5:30am just as it does every morning.

Now, I’m going to get some sleep. Later…