Now that we have gotten through the pomp and ceremony of inaugurating a new president, it is time to get down to work. Hopefully, we elected the right person, and we can turn the responsibilities over to him, and wait for a miracle. We’re going to need it. I still remember “the good old days,” so it’s going to take a lot to impress us 1950s kids. Like I said before, I’m one of the old timers who still remembers the 1950s and I miss it.

I refuse to be discouraged by the naysayers who say we can’t make this country great again. If Trump had believed that, he would not have gotten into the race. He only plays to win. He knew he could win the votes before he even got started. 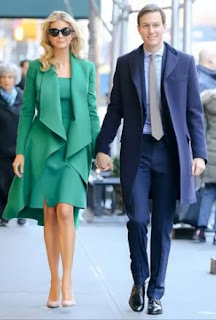 Since Ivanka’s husband, Jared Kushner, has taken a position as Senior Adviser to his father-in-law; the family has packed up and moved to Washington DC. The family is moving into a $5.5 million colonial built in 1923 and renovated to have a modern staircase, five fireplaces, and crown molding. It is located in the same prestigious Kalorama neighborhood as the Obama family's incredible new home. Ivanka Trump left NYC wearing a beautiful Oscar De La Renta, Kelly green dress and jacket.

The night before the Inauguration, Trump hosted a very private Candlelight Dinner. Tiffany wore a heavily embroidered gold and cream Anne Bowen gown. It fit her perfectly and was, in my opinion, her best selection of the weekend. Ivanka wore another Oscar De La Renta gown that was white with a huge black bow flowing down the back. Melania wore an outstanding, gold sequined, form-fitting, long-sleeved custom Reem Acra gown that looked absolutely stunning on her. 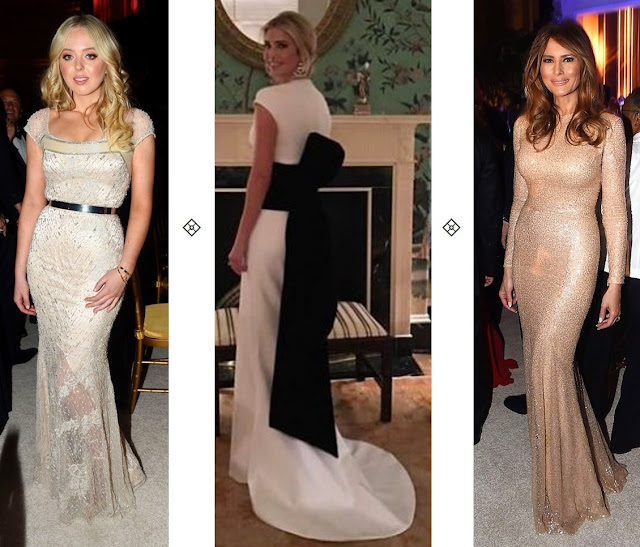 For the Inaugural ceremony, Hillary’s cashmere suit and coat; and Melania’s cashmere dress and jacket were both designed by Ralph Lauren. Wow! Both outfits would probably be considered couturier and cost a minimum of $20,000 with all of the personal fittings and customizations required. Hillary’s suit was very slightly pink/beige colored. Her shoes had little princess heels (instead of the big chucky heels she usually wears), and matched the suit. That’s why the shoes looked slightly off with the white coat. But when the coat was unbuttoned, it all made sense.

Melania’s powder blue dress and jacket were tailored to perfection and the outfit held its own for the entire day, attending prayer service at St. John's, tea with the Obamas, the Inauguration Ceremony (where it endured a sprinkling of rain), attending the Congressional Luncheon, reviewing the military marching bands, accompanying the Obama's to their waiting helicopter, walking in the parade, and watching the entire parade from the grand stand until after dark. 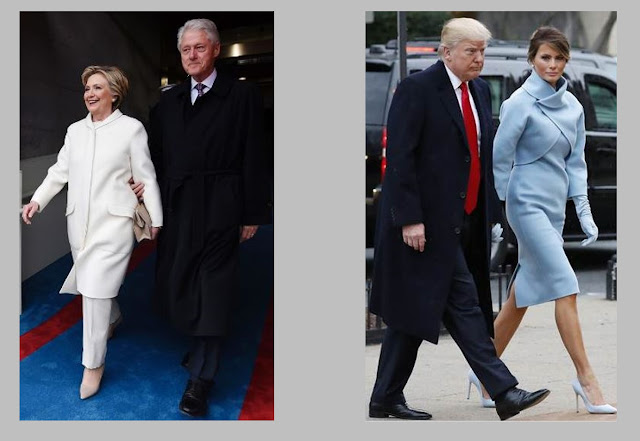 I heard that Hillary was not thrilled that both Ivanka and Tiffany Trump wore white suits to the inauguration. She can't get a break. Plus, her hound-dog husband humiliated her during the inaugural ceremonies by ogling one of the Trump beauties! 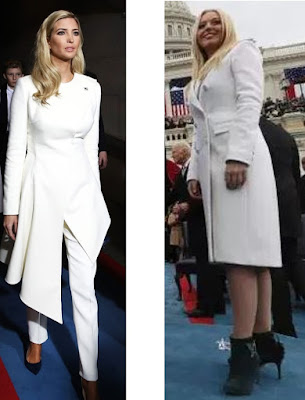 Kellyanne Conway’s military-style coat was designed by the House of Gucci and cost $3,600. Unfortunately, I thought it was hideous. To me, it is more of a costume, and something that can only be worn one time; but it certainly has gotten her A LOT of attention. 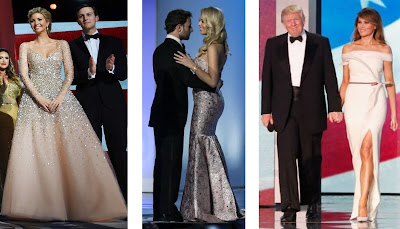 In other gossip—you knew the ex-wives were going to come out of the woodwork. Both of them attended the Inauguration and Marla attended the balls as a guest of her daughter, Tiffany. Ivana ducked out early when she heard Marla was there!

Donald Trump’s first wife Ivana, and the mother to his three oldest children, wants to be the ambassador to her native Czech Republic; saying she’s well known worldwide and she’s ready to serve the United States.

“I have written three books,” she told The New York Post. “They were translated in 40 countries and into 25 languages. I’m known by the name Ivana. I really did not need the name Trump.”

Marla Maples, who does need the name Trump and a job, wants to be a UN Ambassador to a country in Africa. She was spotted at Trump Tower a week before the inauguration, smiling as she exited the elevator; but there was no indication as to what was discussed. Now that Tiffany has graduated from college, they have both been tossed off the Trump gravy train. We shall see what happens next.